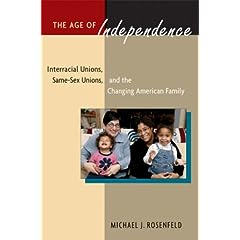 The other day David Brooks wrote a column which appeared to be a stock piece of standard conservative anxiety about what he called “hard-boiled, foul-mouthed, fedup, emotionally self-sufficient and unforgiving” young women. Matt Yglesias picks up on on the piece today, salvaging the key insight of Brooks’ piece from the muddled pop-culture framing. As Brooks says,

Now young people face a social frontier of their own. They hit puberty around 13 and many don’t get married until they’re past 30. That’s two decades of coupling, uncoupling, hooking up, relationships and shopping around. This period isn’t a transition anymore. It’s a sprawling life stage, and nobody knows the rules.

The reality is that technological and economic change has raised the age at which people—particularly more upscale people—do things like get married and have children. But biology stays the same. Consequently, people in their teens and early twenties engage in a lot of courtship-related program activities that don’t really entail a good-faith search for a spouse.

This point is basically correct. And for the past two months, a book exploring just this issue has been sitting on my shelf, waiting to be read properly, instead of skimmed. It’s Michael Rosenfeld’s The Age of Independence: Interracial Unions, Same-Sex Unions, and the Changing American Family.

Rosenfeld is a sociologist and social demographer at Stanford. His book is about changes in the life-course in the United States over the past half-century or so, and their effects on patterns of marriage. For individuals, the life-course is the actual sequence of statuses and roles achieved by particular people, together with the stories they tell about their own biographies. At the level of societies, it is a more-or-less institutionalized set of roles (and rules governing transitions between them), together with collective representations of what a well-ordered life ought to look like. Life-course research isn’t all that sexy, and this is a pity because the connection between the structure of one’s own particular life and the social organization of lives in general is extremely important. The Age of Independence exploits the connection in a creative way.

Rosenfeld begins by asking why American society has seen such a rapid increase in and tolerance for same-sex and interracial couples over the past thirty years. It’s clear to most commentators that much the same thing is happening to the acceptability of same-sex unions as happened to interracial unions in the 1960s and ’70s. Why? There’s a conservative narrative to the effect that the country is going to hell. There’s a whig narrative that fundamental rights are finally and inevitably being recognized. But why is this happening now, when such public unions were successfully repressed for such a long time? Rosenfeld’s idea is to connect these changes to the emergence of a new life-course stage, which he labels the Age of Independence.

Since around 1960, increasing numbers of young people have left home but without themselves starting families soon afterwards. Instead they go off to college by themselves, and then perhaps move to work in a city, surrounded by people much their own age and, like themselves, unmarried. This is the Age of Independence. It can last ten or fifteen years. Much as the teenager emerged as a social category and life-stage in the early post-war period, the Age of Independence becomes established as a phase in people’s lives.

From the point of view of social organization, its defining feature is a weakening or elimination of methods of social control used by parents and their proxies to control the social and sexual behavior of their children. Parents can’t monitor or manage their children as easily because they aren’t living at home, and the children themselves do not get caught up in the demands of the next lifecourse stage—becoming parents themselves—right away.

A consequence for individuals is that relationships which would otherwise have been stifled or eliminated now have the opportunity to form at this stage of life. And it is this that helps explain why first interracial and then same-sex unions increase so rapidly and become controversial legal and political issues when they do. And of course once this gets started, there are various knock-on effects such as political mobilization of the relevant groups, the increasing cultural valuation of personal independence and privacy in general, and so on, which feed back into the process and help institutionalize it.

None of this is to dismiss the political and social-movement work that activists and others have had to do to establish a legal or normative framework for these kinds of unions. Rather, what I take Rosenfeld as doing is to try to structurally explain how these kinds of opportunities open up in the first place.

Now, I’m not a social demographer, or an expert on family structure, and I haven’t read the book in great detail. But the book’s approach is appealing. It connects issues of individual identity and choice to very broad social-structural change through a study of changes in the life-course. And it can explain just the kind of issues that David Brooks and—rather more clearly—Matt Yglesias pick out. Worth a read.