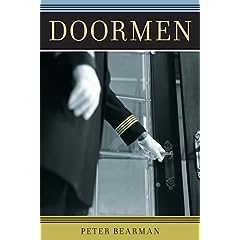 I just finished reading Doormen, by Peter Bearman. It’s a study of the residential doormen who work in the buildings of New York’s Upper West and East sides. A fairly restricted topic, to be sure, but the book is a small gem: the kind of sociology that takes a particular job and investigates it in a way that derives quite general lessons even as it delves into the specifics.

Appropriately, Doormen was featured in the New Yorker recently, though the article didn’t convey the flavor of the book all that well. To get a better sense of it, you can read an excerpt from the chapter about the twists and turns surrounding the all-important Christmas bonus. In Micromotives and Macrobehavior, Thomas Schelling remarks that “not all ellipses are circles,” meaning that not all systems of interdependent, decentralized interaction are markets. He uses the example of people trapped in a cycle of Christmas-card sending. Figuring out the bonus is one of life’s ellipses, too, though a more complex one:

The optimal position for each tenant in the bonus sweepstakes is right at the top of the pile, but within close range of the others’. Little is gained from being in the middle; aside from avoidance of the bottom. The bottom quartile of the distribution is obviously exactly where tenants do not want to find themselves. The dilemma is that it is impossible to know how to position oneself without learning about the expected behavior of the other tenants. And this is why, around Thanksgiving, tenants start to position themselves to learn what their fellow tenants are intending to do. Eventually, they will have to start talking.

The chapter on the bonus is actually somewhat different from the rest of the book. The central problem there is explicitly one of strategic choice and information, something that rational choice theory has a lot of good things to say about. Other chapters deal with things like how doormen become doormen in the first place; the management of interpersonal closeness and distance that comes with the job; the everyday management of the lobby; the way that doormen take care to manage the preferences of tenants; and the emergence of more or less discriminatory behavior when it comes to admitting people to the building.

A book about like this has the potential to be trivial. Many an intensive case-study has perished on the presumption (as opposed to the demonstration) that everyone should be as interested as the author is in the lives of car salesmen or online gamers or fishermen or what have you. The trick is to show not just what’s interesting in particular about such cases, but what’s interesting in general. Bearman has a real knack for doing this. Two intuitions underly his approach. The first is that, while social life is messy and social settings are astonishingly varied, the number of really distinctive kinds of viable interaction is much smaller. The second is that by closely examining the right kind of setting, we can reveal some general features of both individual or local experience and broader social structures. We can also close the gap between the two:

Settings are the interfaces for multiple views conceived here … as the “underside,” where views of lived experience and cognition percolate up to discourse and are relative to self and others (as in interviews), and the “upper side,” wherein lie systematic processes, dynamics, and flows that give rise to structures not necessarily observed or theorized by those who live an work in the setting.

Settings that act as the interface between different structures, identities or environments are also the ones that require the most work. They are prone to bumpiness or friction. Things often don’t go right, in part because one or both parties may be trying to figure out how things are supposed to be going. It’s in these situations that we’re most likely to observe the techniques people use to “jointly construct a workable social world,” in Bearman’s phrase. The book’s subject is its own metaphor: Bearman opens the door to everyday interfaces between inside and outside, friends and strangers, public and private higher status and lower status, frontstage and backstage, personal and professional.

So, for example, getting a job as a Doorman is hard. Next to impossible, in fact. Yet most Doormen say they got their jobs quite easily, often through some chance encounter. This is because it’s a pretty good job, and so referrals to vacancies happen through networks. It’s the flip-side of the market for lemons: “Only bad cars and bad apartments need to look for people to fill them. The same is true for jobs. If the job is good, employers can be choosy … the best applicants come to them already tied to someone they know (or someone whom they know knows).” Bearman offers a nice twist on this connection between within-network transactions and the market for lemons. Friendship networks are not just conduits of opportunities for exchange: their structure can itself be thought of as reflecting a lemon-scented process:

The market for new friends also tends to produce contact with “lemons,” and consequently the common experience is that the first friendships one makes in a new community tend to be short-lived. … Think about the people who have time to meet new people. The less interesting and nice they are, the less likely they are to have friends. Since they have few friends, they have more spare time. … just like cars and apartments, these “lemon” friends tend to circulate rapidly … One of the ironies of friend markets is that while the “lemon” friends could find each other and become friends, their characteristics … are especially unappealing to other boring and intolerant people. So while they meet, they avoid each other.

Back in the labor market, the result of within-network hiring is that, at the individual level, a rhetoric of chance explains how you came to be where you are:

[Chance] provides the main rhetorical device through which doormen describe how they got their job. … These just-so stories are necessarily idiosyncratic. Left out of these accounts are the larger social processes that make “chance” systematically possible.

This has consequences for both the “upper” and the “under” side:

One of these larger social processes is “the strength of weak ties” model, operating beyond the level of individuals and structuring individual experience in such a way as to induce narratives of chance … Critically important is the social structuring of social relationships along the fault lines of race and ethnicity. The fact of social structure act as a channel for information and trust, making opportunities available for some while blocking opportunities for others.

So while the backgrounds of the staff in a building might vary, things are also circumscribed:

The book is filled with examples of what you might call double-edged social processes: opposing tendencies that not only appear together, but in some sense depend upon or induce each other. Social settings are full of antinomies. Some of them are manifested in the experience of the job. For instance, being a doorman is experienced as being boring and stressful at the same time. Or again, most of the time tenants see doormen apparently sitting around doing nothing, but when they need something the doorman will often be busy with two or three other tenants. Bearman provides a nice analysis—in terms of server/client systems and the dynamics of queueing—that explains this.

Other seeming paradoxes have to do with the link between individual action and the social structure. Doormen generally don’t have self-consciously racist beliefs, but because their tenants are disproportionately white, and white people tend to have many more white than black friends, black visitors to the building will be checked or questioned more often than white visitors. The result is that the same black individual visiting friends in different buildings will have the experience of being stopped or questioned too often, while the doormen will not see themselves as doing anything wrong.

Still other cases embody the tension between instrumental and substantive rationality bubbling up in unexpected places. For example, to be a professional should mean treating clients in an even-handed and detached way; not playing favorites. But Doormen who are too even-handed with tenants will seem uninformed, or sticklers for the rules. To really do their job well, they must make discriminating judgments between tenants, learning what each likes and dislikes: and so particularism returns, even though professionalism is supposed to be characterized by its absence. The point generalizes to any number of occupations.

Arthur Stinchcombe blurbs Doormen by comparing it to the work of Erving Goffman. But I think that the real spirit behind the book is not Goffman but Georg Simmel. In his analyses of “social forms” like the stranger, or fashion, or metropolitan life in general, Simmel picks out just the kind of double-edged effects that Bearman repeatedly focuses on. Fashion is what we do to make ourselves different from the mass, Simmel argues, yet it induces fads and conformity. As societies differentiate, the people in them become more different from one another but the societies themselves start to look more alike. The stranger is an unknown quantity, but familiar to all the locals in just that capacity, and so on.

Thinking about social structure in terms of these kinds of dualities is enormously appealing. There’s something of it in each of the grand traditions of social theory: Marx gives us the image of capitalism digging its own grave. Smith shows us how the apparent contradiction between disaggregated self-interest and co-ordinated growth is resolved by the invisible hand. Durkheim presents the modern individual emerging purely as a function of a specific kind of social structure, a by-product of the division of labor. But each of these writers are looking at very large-scale, macro-level processes. Of the classical theorists, only Simmel repeatedly brings this kind of insight to the middle-range and small-scale of social life, multiplying particular examples of social settings where opposite tendencies are held in tension with one another. Appropriately, even here there’s a double-edge, as Simmel’s very specific examples (of particular network dyads and triads, works of art, prostitutes, or the nobility) are also intended to be very abstract and general social forms found everywhere.

Bearman brings exactly this sensibility to his topic. He adds a careful approach to research design (the combination of a good sample survey and detailed observations and interviews is very effective), and the tools and concepts of modern social network theory. He also has a very good line in footnotes:

Dog walkers in the city can make relatively significant money … If they take six dogs out for one hour, they pull in roughly $120. … this translates, over the course of a forty-week year (many dogs go away for the summer), to over $50,000, or roughly $65,000 taxable income. Not bad, for an academic year, and certainly better than most doormen, not counting the absence of benefits and job security, and the fact that they have to pick up an amazing amount of shit.

All in all, well worth your time to read. Especially if you need to give your Doorman a bonus in the near future.